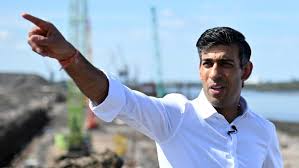 In a historic appointment, Rishi Sunak is set to become Britain’s first prime minister of Indian origin, as well as its first Hindu leader. He will assume the position following a period of political instability and in the middle of a dire economic crisis.

Conservatives are heralding Sunak’s appointment as a celebration of the nation’s diversity, and the right choice to pull the U.K. out of a recession. But those on the left consider the transition of power undemocratic and push back on the idea that Sunak will help marginalized communities. Meanwhile, many in India welcomed the news of his victory on Monday, which also happens to be the Hindu festival of Diwali.

Sunak, 42, was born in Southampton to Punjabi-origin parents who migrated from East Africa. He grew up in the U.K., graduated from Oxford and worked at Goldman Sachs before representing a Yorkshire constituency in parliament and going on to become chancellor in 2020. Sunak possesses exorbitant wealth; his net worth is roughly £730 million ($825 million). His appointment would mark the first time that the residents of Downing Street are richer than the royals. He will also be the youngest individual to hold the position over the last two centuries.

The Conservative Party’s portrayal of his appointment as a win for diversity has faced swift criticism from the left. They argue that Sunak’s policies as former chancellor have harmed marginalized groups and that the process has been undemocratic, since he was not elected to power. Sunak won the position after being backed by 200 Tory MPs. (The U.K.’s next general election isn’t until Jan. 2025, and there is no incentive for Sunak to call for a snap election given the Labour Party’s overwhelming lead in the latest polling.)

Opposition parties have already called for a general election. “The Tories have crowned Rishi Sunak as prime minister without him saying a single word about how he would run the country and without anyone having the chance to vote,” said Angela Rayner, deputy leader of the Labour Party. Fellow party members argued that he would not be a win for Asian representation. “He’s a multi-millionaire who, as Chancellor, cut taxes on bank profits while overseeing the biggest drop in living standards since 1956. Black, white or Asian: if you work for a living, he is not on your side,” tweeted Nadia Whittome, the U.K.’s youngest MP, who is also of Indian origin.

Current and former British officials have largely welcomed the news. Foreign Secretary James Cleverly, who had initially backed Boris Johnson in the race, switched his support to Sunak once the former Prime Minister withdrew and referred to Sunak as the “candidate with the most experience.” Former Prime Minister David Cameron congratulated Sunak on Twitter, adding that he predicted a decade ago that Conservatives would select their first British Indian Prime Minister. King Charles III is planning to meet Sunak later Monday.